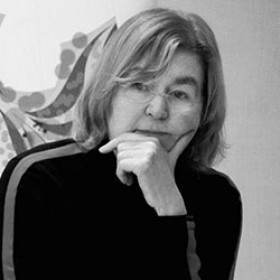 Diana Balmori, Ph.D., FASLA, IFLA, founded Balmori Associates, Inc., a landscape and urban design firm, in 1990. Diana Balmori is recognized as a theoretical designer through a variety of publications and maintaining an active role in the design/architecture and landscape communities. Since 1993 she has been a Critic at Yale University in both the School of Architecture and the School of Forestry and Environmental Studies. Her book A Landscape Manifesto (Yale University Press, 2010) has received international attention and was recently translated into Chinese. Her most recent book Drawing and Reinventing Landscape was been published by A/D Wiley in 2014.

In addition to practicing and teaching, Diana Balmori keeps an active voice in national policy and decision-making on topics that relate to design and development. She has served on the Boards of: The United States Commission of Fine Arts in Washington, DC; Senior Fellow of Dumbarton Oaks, Washington, DC; Allston DevelopmentGroup at Harvard University, Boston, MA; The Van Alen Institute, New York City; The Lower Manhattan Development Corporation for the World Trade Center Site, New York City; served as a Committee Member for the Comprehensive Design Plan for the White House.

Diana Balmori’s opinion-editorials and articles about her work have been featured in Dwell, The Architects Newspaper, Monocle, El Pais, PBS, WNYC, Design Observer, and Utne Reader, which named her one of fifty “Visionaries Who Are Changing Your World” in 2009. In June 2013, she was named Fast Company’s 2013 Third Most Creative People in Business and one of ten in the 2013 Innovators by Architectural Digest.