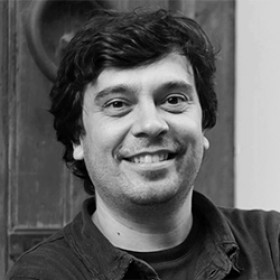 Graduated as an architect from Barcelona’s School of Architecture (ETSAB) in 1997, Daniel Mòdol has been teaching at the prestigious Elisava School of Design in Barcelona. Since 1999 he has been Associate Professor at ETSAB’s Urbanism and Territorial Planning Department. In the field of Urban Planning, he has collaborated for a number of years with some of the most renowned Architecture and Urbanism Spain-based studios such as Manuel de Solà-Morales; Rosa Barba and Ricart Pie; Carme Ribas and Pere Joan; Ravetllat and Viaplana-Piñón.
.
For the Spanish Board of Civil Engineering he has developed a significant work in enterprises involving new municipal infrastructures and town planning projects, taking responsibility either as a director or as project engineering consultant.
From his own Architecture and City Planning Studio, DMDEAU, set up in 2004, he has carried out some large scale work on reorganising the city. Of a particular interest are three projects undertaken in Barcelona: the restructuring of the new Las Glorias Square; the reconfiguration of the Meridiana Sur area; and the construction (now still in execution) of a new market in the popular borough of Guineueta. Also in the Catalan region, the Cultural Centre in Lloret de Mar (Girona), a new building of 8,000 m² which integrates public services as a library, a gallery, a club for the elderly, an occupational centre and space for offices. This building has entered the final list of the Architecture Prize from the Girona Region of COAC (the Catalonian Architects Association).
The recognition of his work, both as an architect and city planner, resides in his problem solving expertise, acquired in responding to commissions from the Spanish different Boards that present a high degree of complexity. One successful example is the structural redesign of Trinidad junction, one of Barcelona road network keys. As Urbanism expert, he is responsible of the technical in-depth study on the impact of the new building for “Los Encantes”, the most famous Barcelona’s second-hand market.

Daniel Mòdol is a regular lecturer at the most prestigious academic institutions– his most recent presentation has taken place at Harvard University. As co-author, he has been involved in the writing of books on the subject of Urbanism: “The road infrastructure project” (2004), with Estanislau Roca and Manolo Franco. “Urban project: a pedagogic experience” (2008); “Diagonal: the urban project” (2010); “On urban support” (2010) and “Glorias. City renewal and public space” (2011), all in collaboration with Estanislau Roca, Ricard Fayos and Daniel Navas.
A selection of his projects has been exhibited in collective shows as “Barcelona in Progress”, Forum Barcelona (2004); “Barcelona Directions” (2011); “Catalan Architecture” (Perpignan 2012).