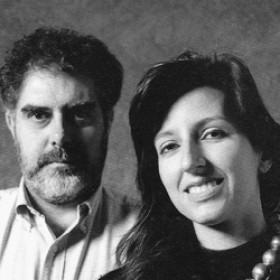 Enric Miralles, a renowned Spanish architect, was born in Barcelona in 1955 and died prematurely in 2000. He studied at the Barcelona School of Architecture (ETSAB), from where he moved to Columbia University in New York. He lectured at both universities, and was awarded many prizes in his lifetime including the Gold Lion at the 1996 Venice Biennale. He was also a visiting lecturer at many schools of architecture and design. At Harvard university he held the "Kenzō Tange" Chair from 1992 onwards.

In 1995, he set up the EMTB studio with Benedetta Tagliabue. Tagliabue was born in Milan in 1963 and studied architecture at the Istituto Universitario di Architettura di Venezia, furthering her studies in New York. After completing her PhD in 1989, she moved to Barcelona where she later began to work with Enric Miralles. Together they worked on major projects such as the Santa Caterina Market renovations in Barcelona, the Venice School of Architecture and the Scottish Parliament.

Miralles and Tagliabue created the ADA paver in conjunction with Escofet, and also the LUNGO MARE landscape element, awarded the ADI-FAD Gold Delta Prize in 2001 by the FAD Industrial Designers Association.