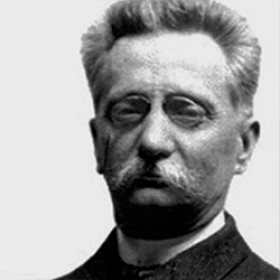 Lluís Domènech i Montaner architect, historian, humanist, politician, typographical designer and illustrator, was born in 1850 in Barcelona, where he died in 1923. In 1873 he graduated as an architect in Madrid. His personality and his work have made him one of the great paradigms of the educated, progressive, creative spirit that emerged from the catalan Modernism at the end of the century. His architectural projects are a graphic reminder that he authored some of the most rational and decoratively rich architectures in the history of Europe, with ornamental features based on a wise reinterpretation of historic styles and Hispano-Arabic architectural trends. His most outstanding work in Barcelona includes Palau Montaner, Thomas House, the current Zoology Museum, originally built as a restaurant for the 1888 Universal Exposition, Santa Creu i Sant Pau Hospital, Palau de la Música Catalana and Fuster House. Domènech i Montaner worked with Escofet to create a collection of hydraulic mosaic tiles, an important expression of the designs and stylistic discoveries that emerged from catalan Modernism.