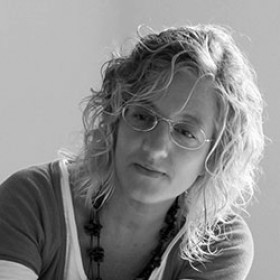 Lola Domènech (Olot 1967) architect from the ETSAB 1994 (Escola Técnica Superior d’Arquitectura de Barcelona). She started working in an architects’ studio in 1995 on different building and public space projects. Her professional career has received recognition in national and international publications and she has won various awards. In 2004 she received the award for the best work in Menorca for her first building. And more recently, she has received the FAD public opinion prize 2012 and the External space COAB-2013 Special Mention for the remodelling of Barcelona's Sant Joan Promenade.

She currently combines her professional activity with teaching. She participates as a professor on the Master in Spaces Design and Architecture (Disseny d’Espai i Arquitectura) at Escola Elisava (Universitat Pompeu Fabra). In the last two years she has been invited by Universitat CEDIM de Monterrey-Mexico as a visiting professor on the Architectural Projects programme. She has also given conferences at Escola d’Arquitectura de Barcelona (ETSAB) as part of the Master in Landscaping, Escola d’Arquitectura del Vallès (ETSAV) and Universitat Cardenal Herrera in Valencia.