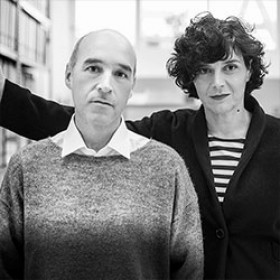 Ana Mir and Emili Padrós met in London while studying for a Master Degree in Industrial Design at the Central Saint Martins School of Art and Design. In 1996, they began to work professionally in Barcelona, and founded the emiliana design studio to develop their joint and individual projects. Emiliana design studio combines the design of products, furniture and lighting with the the generation of ephemeral spaces and exhibitions. Emiliana design studio's vision is based on experimenting and prospecting in new fields, striving to make the relations between objects, spaces and users as exciting, participatory and creative as possible. Some of their designs are now part of the French Fonds National d'Art Contemporain, the Barcelona Museum of Decorative Arts and the Indianapolis Museum of Art. Ana Mir and Emili Padrós were awarded the 2005 ADI-FAD Silver Delta for their “Collector” lamp, the FAD 2000 Ephemeral Architecture Prize, First Prize in the 1999 Domus Boeing International Business Jet awards and the 1999 City of Barcelona Design Award. Emiliana design studio has designed a new landscape product in conjunction with ESCOFET, OTTO, which serves as a tree surround, a planter, a bench and a playing zone.