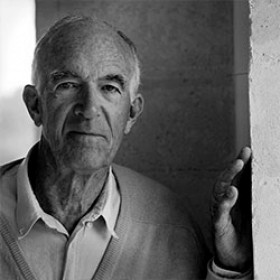 Jørn Oberg Utzon was born in Copenhagen in 1918. He was raised and educated in Aalborg, an industrial city in Jutland on Denmark’s north-east coast. In 1937 Jørn Utzon enrolled in the Faculty of Architecture of the Royal Academy of Arts in Copenhagen. He worked briefly for Hakon Ahlberg, a recognised leader of the architecture profession in Sweden. Also Utzon worked with architect Alvar Aalto and Paul Hedquist and he collaborated with Arne Korsmo and Tobias Faber in several architectural competitions. In 1950 Utzon set up his own architectural practice in Denmark and two years later established a partnership with Erik and Henry Andersson based in Helsingborg, Sweden. Between 1953 and 1960 Utzon was awarded first prize in several Scandinavian competitions, mainly for housing projects. Utzon worked on his entry for the Sydney Opera House international design competition. In early 1957 Utzon was announced the competition winner and he immediately began to work on a model of the building. Utzon worked on the Sydney Opera House from Denmark until 1963 he worked in close collaboration with the London-based Danish structural engineer, Ove Arup, and Arup’s staff on the geometry of the shells. From 1965 tensions arose between Utzon and the New South Wales Government over cost and time overruns on the Sydney Opera House project. These tensions led to Utzon’s withdrawal from the project in February 1966 and his departure from Sydney in April 1966. Utzon worked on a number of projects including the Bagsvaerd Church in Copenhagen and the Jeddah sports stadium in Saudi Arabia. In 1970 he was awarded the Mobel Prize for furniture design for his 8108 chair. In 1982 he established Utzon Associates with his architect sons. Utzon collaborated with his sons on several projects including the Paustian furniture showroom (Copenhagen 1987), the Danish Museum for Modern Art (Fredensborg 1988) and several other museums of science, history, culture and art in Denmark. In 2003 the Utzon Center was established at Aalborg University to expand the appreciation of Utzon’s work within the context of Nordic and international architecture and design.